I have been sitting on this post and this subject  for a long time. I realize the reason people come here is for beauty tips, not to listen to me ramble about the appropriateness of asking strangers of when they are having children, but since I have an audience, let this be heard.

For those of you who are new here and don’t know me, I am a 29 year old married woman. My husband and I both work full time, are financially sound, own a home, two vehicles and a dog with a fantastic family temperament. Picture perfect right? Ha Ha, not even, no one is, but that is neither here nor there for this topic of conversation.

Here in lies the issue. We have opted to live as a childfree couple, and that has become a controversial topic.

This does not go to say that my husband wouldn’t make a fantastic father, or say anything on my child raising/wanting abilities. It is truly neither here nor there, and my/our reasons for not having children don’t matter in this case.

I want to address this issue because when we are asked and tell people that decision an argument ensues almost every time.  It’s the same comments…

Who will take care of you when your older?

Your going to miss out on the joys of mother/fatherhood!

You will love them because they are yours!

It’s the best thing we\I ever did!

Don’t you feel empty inside?!

It’s your duty as a woman!

You were put on this planet to make a baby, it’s your social obligation!

and so on and so on. 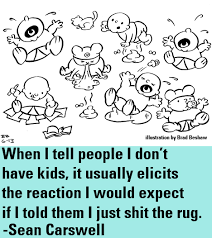 If she responds with the latter, the reaction is listed above. What you don’t know is that woman just came back from spending 100’s of thousands of dollars on IVF, on fertility testing, failed pregnancy tests, and sleepless nights filled with lost hope. She feels faulty and worthless and like she can’t complete her “god given right” and her “social obligation”.  She has sat at friends and families baby showers, and celebrated new lives, after having yet another negative sign thrown in her face just before. 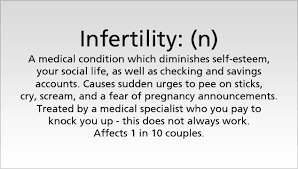 The man you asked, has been given news that his sperm count is too low to have a family with his wife, and they have spent the night arguing about it. He is tired, disappointed and feels terrible for taking away the chance to be a Mother, from the woman he loves. He is trying to support her through a terrible time and feels like he is incomplete and less of a man.

The last thing they want to hear is all they are missing out on. You might think you know what they are going through but the likeliness is they haven’t told you anything.

Generally just avoid the “when are you having kids?” question. It opens a can of worms that most are not ready for or prepared to share details on.

I completely understand that this question is asked by way of making common conversation, but it is truly a private question and a private position of the parties involved.

Disclaimer: Fertility issues do not apply to Ccosmetic Chaos

34 thoughts on “Real Talk | When Are You Having Kids?”