It’s been a few weeks since I have made one of these posts. I enjoy them, even if you don’t so here we are again! 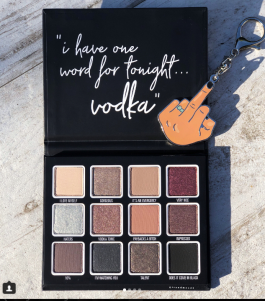 Would this even be a carts and farts without some random new release from Kylie Cosmetics that is in the format of a family member? Talk about capitalizing on your relatives. Well done Kylie, you have released another snore of a product and I still hold firm that I would rather LITERALLY flush my money down the toiler than give it to you. There is an entire collection, but really I would only be interested in the palette if anything, and nope. Never going to happen. Go to ColourPop if you like these shades. Makes more sense financially.

I want to like these. I really do, but the swatches are just ‘MEH’ in my opinion. Lately I have been really liking the Supernova shadows from ColourPop, as well as the Stila glitters/cream shadows. I also have the BH Cosmetics version on it’s way to be. So I could sit here and say that I like them and NEED them but in reality I do not, and the ones I already have seem to have better pay off and opacity than these. Understood that it looks like a few may just be glitters, but for promotional swatches, everything looks patchy. I don’t need patchiness in my life.

In a general statement, the makeup industry as a whole seems to have run out of ideas, and is now just re-releasing items over and over. All of these previews have come up in the last week… and wow. It’s been done. ColourPop, Tarte… what is happening to you?

I’m not sure I could have seen more boring palettes unless I got in a time machine and morphed back into the 20’s. There is nothing wrong with a beautiful classic look but these palettes are all… so basic. These are already in peoples collections, and for people just entering the market, it’s not giving them much to work with. Who is the target market with these bad boys?

This month being no money May, I was surprised that nothing had come up at all on Trendmood this week that really caught my eye. Maybe the no buy is truly taking its hold on me…